For Sampoerna, sustainability is about creating long-term value and minimizing the negative externalities associated with our products, operations and value chain.

Sampoerna believes that business transformation is needed to create a positive impact on operations, social and the environment.

Our sustainability approach is a key element of Sampoerna’s overall business strategy. It is structured around 4 pillars which enable us to leverage and achieve our commitments under Sampoerna untuk Indonesia, which are:

In doing our business, we always uphold integrity and compliance with regulations. Together with tens of thousands of workforces, we continue to support the national economy and to respect human rights in every part of our value chain. We are committed to continue to innovate, improve access to technology, market our products responsibly, manage our supply chain in responsible manner and apply operational practices to the highest standards.

We are committed to support national social and economic growth. We do this through workforce absorption and development, as well as improving the welfare of the community through development of Small and Medium Enterprises (SMEs), improving the quality of life of partner farmers, and eliminating child labor in tobacco and clove farming. We believe everyone has the same opportunities and opportunities, therefore we also make inclusion & diversity, safety at work, and a fair work environment as a culture in Sampoerna.

Effective environmental management across our operations and value chain is central to help us minimize environmental impacts and addressing climate change.

We strive to minimize carbon footprints in the value chain, manage water sustainably, and conserve biodiversity wherever our facilities are located. Furthermore, we also utilize renewable energy and manage waste appropriately from farming areas up to our post-consumer waste.

We always strive to innovate to provide better alternatives for adult consumers. Our parent company, Philip Morris International, has created a product with a significantly lower risk compared to conventional cigarettes, which are heated tobacco products. We aim to provide full and clear information to adult smokers of this innovation. This innovation is strictly aimed at those who will continue to smoke. We still clearly state that the best option is to quit smoking altogether. This is the core of every commercialization activity that we do. 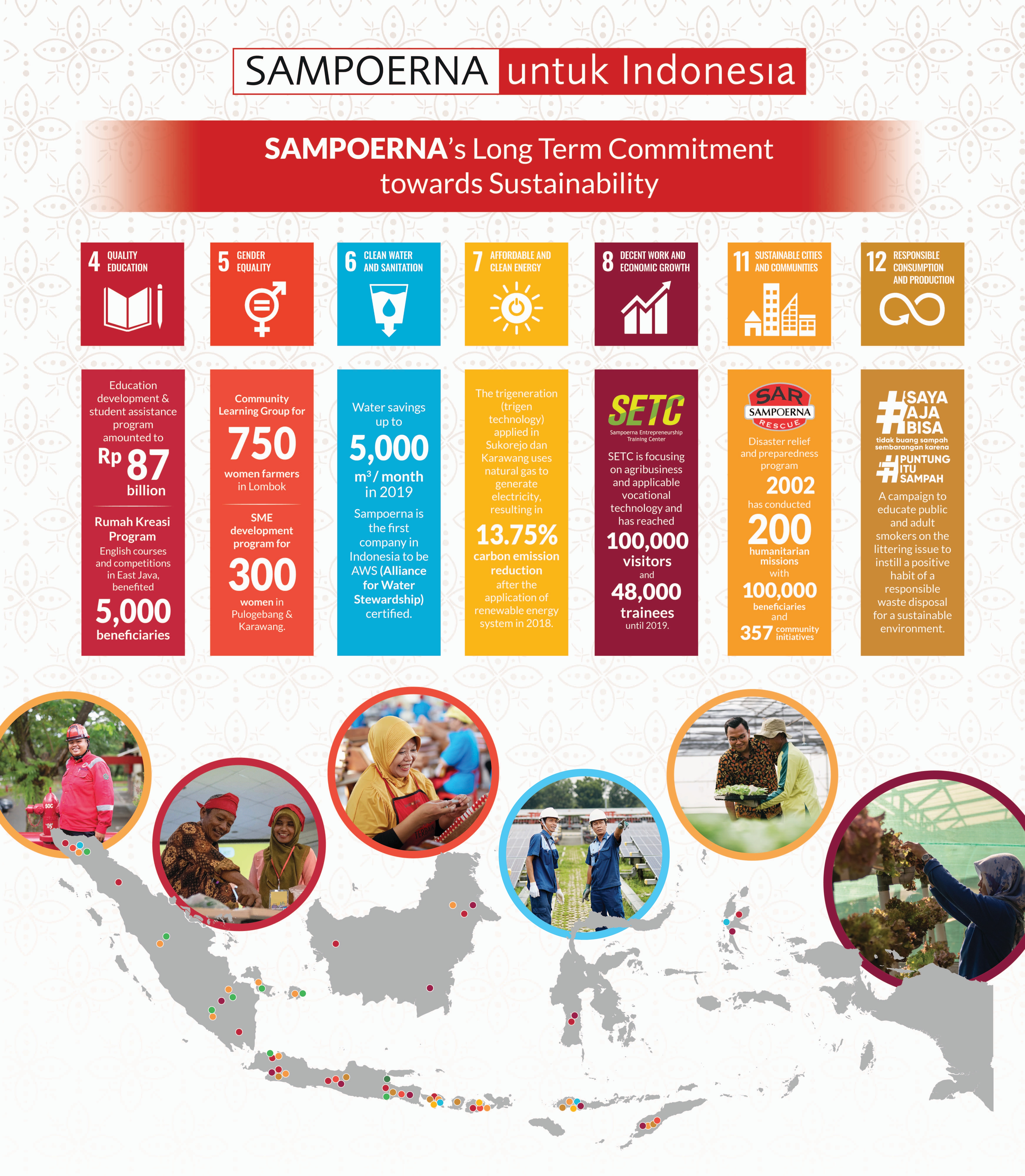 Indonesia has suffered a number of devastating disasters in 2018. On August 5, 2018, Lombok was struck by a devastating earthquake with a magnitude of 7.0, followed by another 6.9 quake just two weeks later. The two earthquakes left almost 80% of structures in North Lombok damaged and more than 400,000 people displaced. Sampoerna Rescue (SAR) quickly mobilized a team to provide emergency response, collaborating closely with the Indonesian National Board for Disaster Management (BNPB), the local government and NGOs. The SAR team and the Indonesia Skala Foundation assisted impacted villages through the Lombok Build Back Better program by building public sanitation facilities at Sandik village in West Lombok, Selengan village in North Lombok and Obel-Obel village and Sembalun Lumbung village in East Lombok. We also distributed a humanitarian aid packages to victims in Lombok and Sumbawa Islands. Sampoerna’s humanitarian program also includes post trauma psychological support.

Just a month later, on September 28, 2018 Palu, Central Sulawesi was struck by a tsunami. The Company’s SAR once again quickly organized a response team to provide excavators for rescue efforts, set up shelters, establish kitchen facilities and distribute medicine and clean water to victims. The team also provided health checks for the residents and provided much needed clean water for cooking, bathing and washing.

Since 2002, the Company’s SAR has mounted more than 200 humanitarian missions across the archipelago, directly benefiting more than 100,000 people. In recognition of the SAR team’s contributions over the past 15 years, the Ministry of Social Affairs awarded Sampoerna with 2018 Padmamitra Award in the disasters category.

Inaugurated in March 2007 with a range of facilities to support entrepreneurship development, SETC provides training and meeting rooms, a tissue culture laboratory, areas for livestock, fisheries and research, and lodgings. Today, SETC has reached SME businessmen in 79 cities/ regencies all over Indonesia.

By December 2018, SETC received around 96,000 visitors, trained around 46,000 people from all over Indonesia as well as foreign countries and assisted 46,000 SMEs. Sampoerna leveraged its business knowledge to strengthen SMEs entrepreneurs in Indonesia.

“SETC assisted me to develop my food business in order to improve the product quality and marketing, such as improving the taste, better packaging, obtaining the permit from the Health Agency and going through a more hygienic processing.” 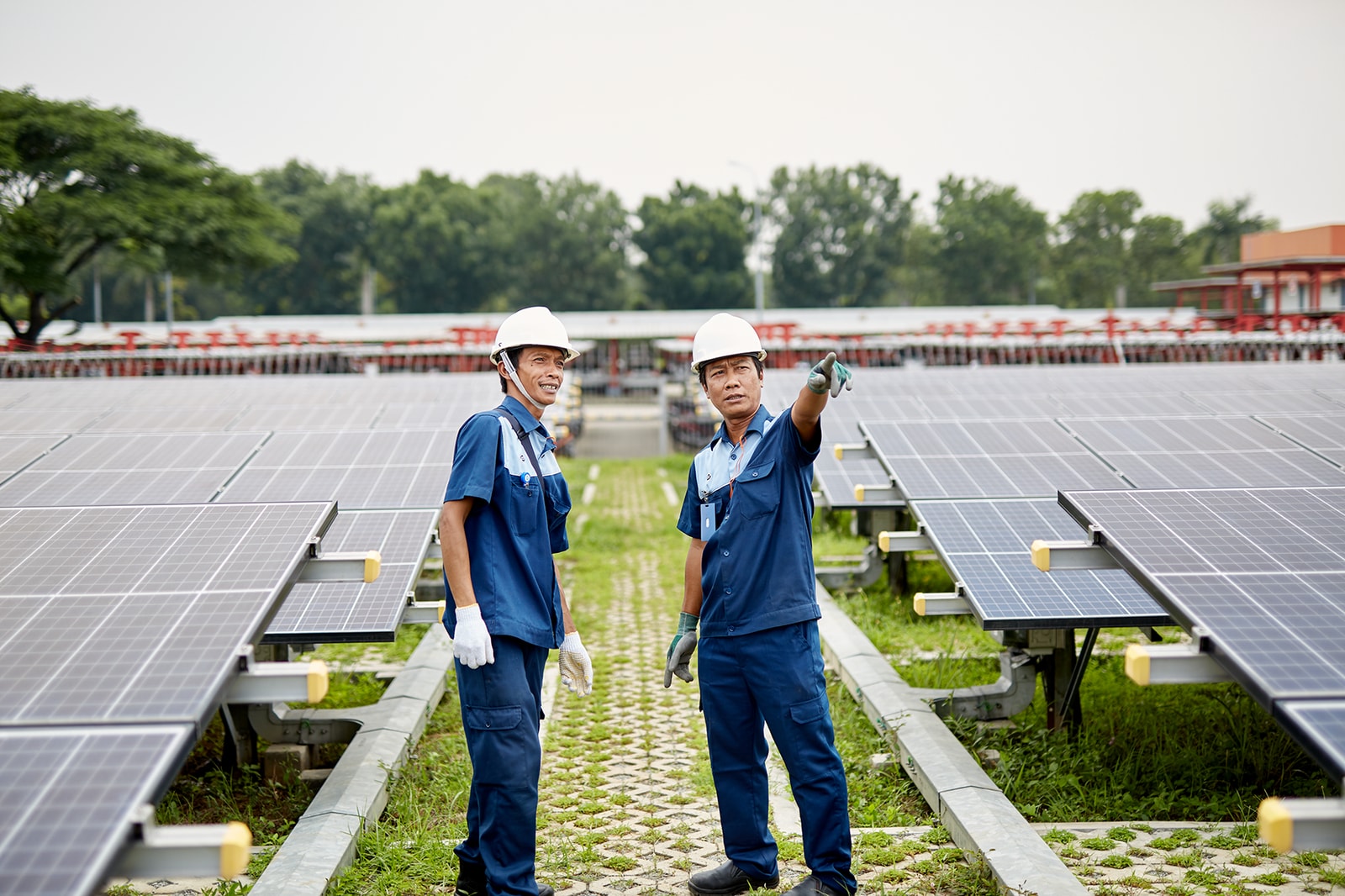